Habitat is Doris Uhlich’s biggest choreography in open space to date. The naked bodies of 35 people flick, vibrate and slap against each other to electronic sounds and abstract techno tracks. The performers celebrate their unity in diversity. As individuals and as a crowd at the same time they conquer the space in a choreography that is captivating, highly energetic and, at times, collectively reposing. Frascati is transformed into a habitat full of unexpected life forms – the audience moves about freely in the available space. The project transcends conventional ideas of the body, of dance and of nakedness in a subversive manner.

Habitat is a utopia. A shameless but also a free-of-shame hymn to a naked body beyond cultural inscriptions and conventional ideals of beauty. The body is not devalued to the level of a fetish, an object; and carnality is neither metaphorically nor poetically ideologized but understood in a material sense and is therefore presented in all its mass and weight yet also in its fragility.

Habitat can be developed in different places with local people. Doris Uhlich is interested in working with large ensembles, which are developed temporarily at specific places in order to transform dance into a collective ritual. 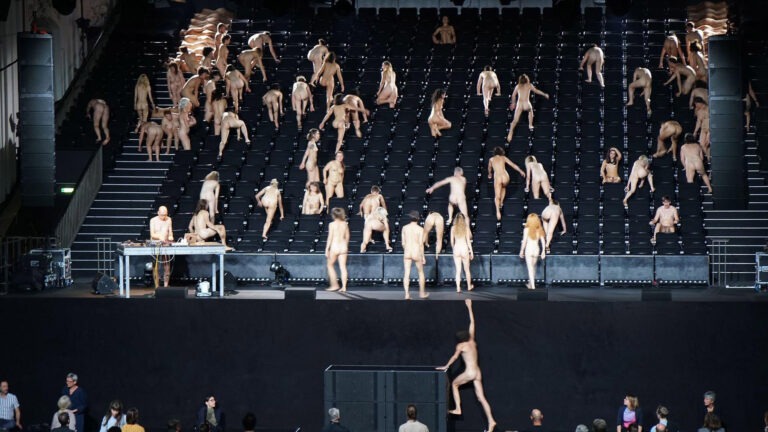 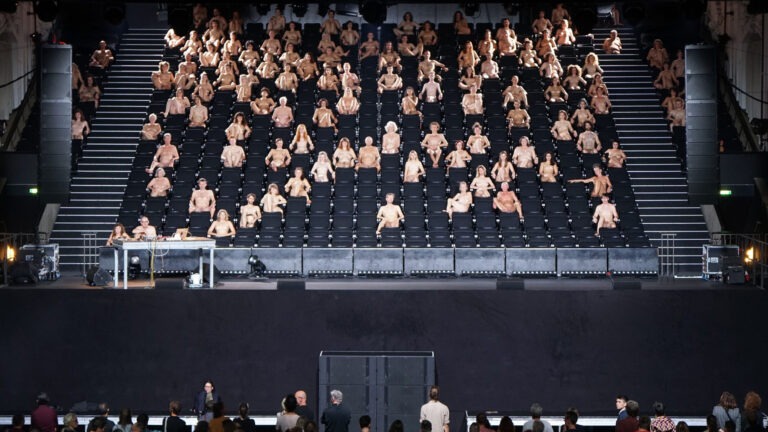 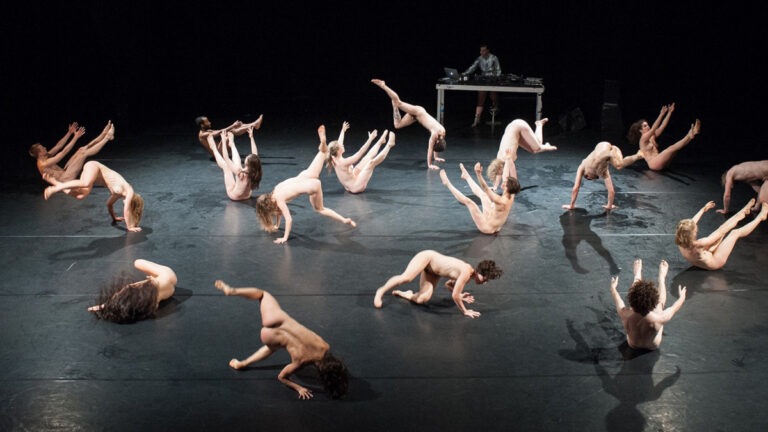 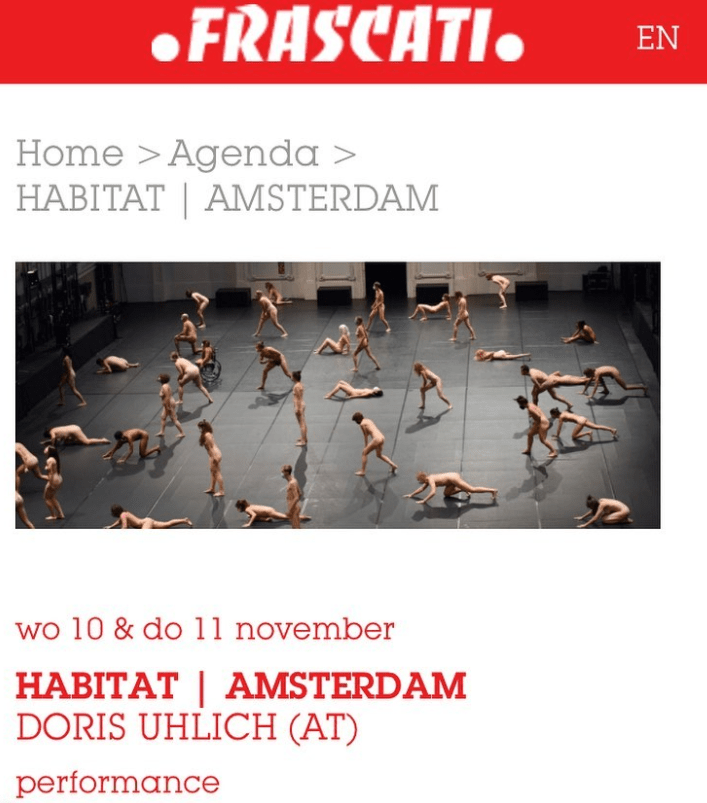 …and as we gathered at the entrance of Frascati 1 – each of us bent over our phones, carefully watching and listening to the news – we entered a new lockdown together. This time, the theater remained open. As a last resort to come together. That is, at least for now.

Written by Katía Truijen
In these fragile times, we are asked to continuously negotiate our individual freedom to move, with solidarity and empathy for others. While it is impossible to predict whether and with how many we can share space next week, any idea of the future and even the very near future is put on hold. Under these conditions of both stasis and continuous adaptation, the theater as a space to collectively rehearse how we want to live together is extremely relevant.
Frascati Issues is a recurring series that investigates pressing social issues through Dutch and international performances, discussions, and other public formats. This edition of the series The Gathering focuses on what could be considered the essence of our humanity: coming together. But today, coming together means taking risks. For the theater itself, new measures and possible outbreaks may cause the program to end prematurely. The audience too is taking risks, even if weaponed with QR codes and covid regulations – that may change tomorrow. And finally, the artists are taking risks. Productions need to be adapted, performers may need to stay in quarantine, and shows may be canceled on the day itself.
Within this restricted world of constantly changing boundaries and behaviors, The Gathering explores and questions what it means to be human: individually and collectively. How to be together, apart, independent, interdependent, a body, with other bodies, in conversation, conflict, connection, or contradiction. And how to understand the forms of gathering that are fundamental for any society, from the parliament as a basis for democracy to the right to protest. Ultimately, each of the performances curated for The Gathering could be considered as a rehearsal: to question normalities, and to imagine other modes of togetherness.
“There can be no return to normal because normal was the problem, to begin with.” This sentence appeared as graffiti in many cities during the first global lockdowns in 2020, and its position is exactly at stake in the artistic research project The Unalphabet by Studio Julian Hetzel. In open ‘laboratory sessions’, they investigate the contradictions of Western culture, where ethical principles are often not in line with economic interests, such as claiming to practice ‘solidarity’ on the one hand but practicing ‘greed’ on the other. Their first session looks at the power of language, starting with the alphabet, and how it can be a tool to shape realities. The Unalphabet instigates a letting go of fixed meanings and taken for granted knowledge. “Many words construct many worlds”, states media researcher Evelyn Wan. What we consider as ‘normal’ is in fact constructed, and can be unpacked, unlearned, and reimagined.
A different kind of arena is staged in Habitat by Doris Uhlich, where a group of naked bodies walks into the room to take a position. For this performance in Amsterdam, Uhlich invited local residents to join and rehearse for a short period of time, leading to a group of 35 performers and a great diversity of participating bodies. Next to the group of naked performers, 140 bodies of audience members move freely in the space around, wearing clothes and face masks and blue plastic shoes that produce sliding noises across the floor. In a corner, a DJ (naked) starts a techno beat. The performers are assembled in groups forming powerful collective body statues. A little later, they come together, lying down as one connected body that shakes and shivers in the middle of the floor. The rave is on, with each performer now moving individually and having their own characteristic way of moving and shaking intensely. Soon after, their bodies cling back together in a collective dance. Then, they seek to support each other’s body poses. To rave literally means ‘to show signs of madness or delirium’, yet also comes from the French word for dreaming. Experiencing Habitat is exactly this, as if waking up in a weird and highly energetic dream, surrounded by vibrating bodies that at times seem to be controlled by an external force (the DJ?), and at other times seem to enjoy their freedom of movement and room for individual expression. A kind of freedom that is moving: mentally as our freedom to dance and of movement, in general, has been limited and clubs have been forced to close during the pandemic, but also literally as the audience must practice avoidance strategies in order to make way for the fast and free movement of the performers.
The choreography of Habitat celebrates a diversity of bodies, in all their materiality and fragility, in a gathering in overdrive. There is a sense of care and reciprocity: each body at times supports and is supported by others. While a rave is often about immersing and losing oneself in a collective mass, Habitat shows that each human body is individually significant and unique. The performance calls us to acknowledge everyone’s distinctive desires, room for individuality, as well as to acknowledge the human need to be respected and included as part of a community.